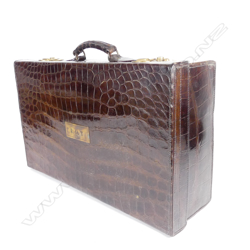 An impressive crocodile skin fitted travelling case, with original canvas cover. Named to the front. 710 x 430 x 210mm. Provenance: Born in Bombay, Mrs Mehroo Jehangir was the daughter of Sir Dhunjibhoy and Lady Bomanji. Her father was an Indian Shipping Magnate from Calcutta where he built up a significant fortune, but he and his wife divided their time equally between India and the UK (where he owned the 40 bedroom mansion called Pineheath in Harrogate, Yorkshire and a house in Windsor). The family moved in high society and were known for their very generous philanthropic activities for which he was knighted. The crocodile suitcase, evidently owned by Mehroo may have been made in India, but the high quality workmanship could also indicate that the skins may have been taken to the UK for the case and cover to be manufactured there. Widowed in 1944, the death of Mehroo in 2012 heralded the end of the Bomanji dynasty in England and their Harrogate home was tragically deserted.